If you missed out

So my little tragic slaves, it’s been a hectic few months, I’ve been a very busy bee. Sessioning one-to-one from chambers in Huddersfield and travelling around working and meeting new slaves in amazing surroundings. Even when its time to settle down on a night a few have tempted me into skype and txt domination.

You have worn me out to say the least, although its been amazing fun. 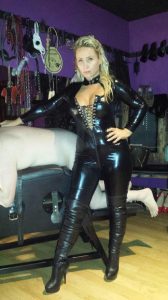 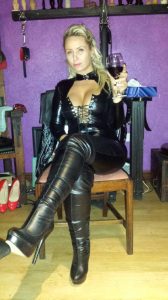 So this blog is to let you all know that all has calmed down a lot for xmas. I will be in Huddersfield and Manchester now taking sessions over December and the Christmas and new year period.

There are no trips away booked now before then. So all those slaves that have been calling trying to book with me and I have been too busy or away, now is your chance.

I will be working from 10 am through until late. Monday to Friday and most weekends.

I also do double domination with Mistress Tania in her fully equipped chambers.

But for now do you want a little story to fill your imagination with ???? 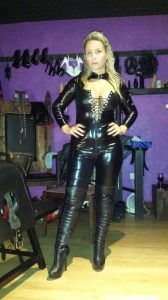 Shopping… I love shopping. I love the city so what better way to shop than in the city. I like shopping alone, no distractions. All those shiny 5 inch heels that I slip on in admiration, thinking of all the naughty things that could happen in these shoes. Watching a slave lick them clean, Trampling on a slaves back or good old ball busting.

I’m tired and hungry now I see a nice hotel I’ll stop for lunch and a coffee. Sat down I start to answer my emails: slaves telling me their fantasies and asking if I could fulfil them. Grinning to myself and thinking “are they kidding?” not only can I assist in their fantasies I can make them more real than they could ever imagine. All these emails are making me feel very naughty, I sit back and sigh. Then I see him, I see one of my naughty slaves sat with men all dressed in suits. I stare and think its time for some fun.

I walk past them only giving eye to what’s mine, they stare back at me and then his eyes lock with mine I see the fear on his face and this makes me feel alive. As predictable as a dog following a bone he stands up and follows me, Men are so weak ha ha ha. I stand outside the male toilets and wait for him to catch up. I make him check the toilets are empty, when he comes back out to give the all clear I grab his tie and pull him in. “Anybody could come in at any time!” I whisper to him. Shaking he looks at me in utter shock at what’s happening to him… “Drop to your knees!” I tell him. “Clean the bottom of my shoe and thank me for bumping into you.” He thanks me. I know he means it. He’s on his knees looking up at me with scared puppy like eyes, his hands are running up my legs as he feels my stockings but would never dare touch my flesh were my stockings end. He begs me to tell him what I want so he can just get it done before he gets caught by someone from the vanilla wold at any second. I pull him up by his tie and spit into face laughing at him for thinking he is anything but a pathetic slave. I touch his crotch with my foot and can feel he’s excited as well as scared. I have him now I push him away and hold out my hand. He knows what he has to do to stop me going out of these toilets and exposing him for what he is. He hesitates, I run my hand over his mouth, he kisses it. I draw it back and strike him across the face and tell him to hurry before someone comes in. Then he comes to his senses, gets out his wallet and hands me all the notes he possesses in it… a few hundred, ok that will do. I tell him to stand and clean him self up. Of course he thanks me he knows it could have all been much worse and I was being kind to him not letting it go that way. I make him leave first to keep the door open I brush my self down wink at him and carry on with my day more fulfilled than I was 20 minutes ago…

Aahhhhh blackmail you cant beat it!!