Obviously you bunch of perverts have all kinds of fetishes running through your minds but today I was wondering what’s the cross over between “our” world of sexual thoughts and the vanilla world??? I mean when you see a woman that catches your eye do you think I’d love for her to choke me or piss on me or whatever fetish it is you’re into or do you ever think “I’d love to fuck her !!!” ???

This came into my head last night as (yes a little crazy and vanilla but…) I was watching Emmerdale. There’s the most handsome guy in it. Young, rich, successful but very fucking twisted and I thought to myself, “mmm what I would do to him??” But it wasn’t kiss him, touch him or fuck his brains out, it was I’d tie him down and do unimaginable things to him!

I would find him in a bar, sit by him, let him notice me, catch his eye contact, smirk and give him that look to let him know he can approach me.

When he does we will have wine together, not too many I want him fully aware of what’s happening to him later when I’m playing.

I wouldn’t beat around the bush I’d tell him “let’s finish our drinks n head back to mine.”

Of course he’d think I wanted to fuck him so he would agree to this, as any man would. I’d be smiling with excitement while walking out to the taxi.

Back at my flat I’ll pour more drink. I’ll lead him to the bedroom; idle chit-chat isn’t on my agenda! I’ll put down my drink, start to undress him, push him down onto my bed and slip off my dress revealing my stockings n sheer black underwear. I’ll straddle over him – he’s hard now he’s thinking sex is coming his way.. 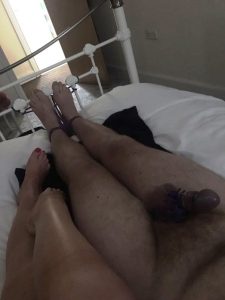 I’ll raise his hands above his head n grab the rope already attached to the iron bars of my headboard and tie him.  I’ll move down n tie his feet. At this point he’ll look confused but won’t struggle, he’ll secretly like it. It’s taking away the power he always holds in his world of business keeping things together all the time. He feels relaxed and released from his stresses. I’ll stand up, look at his handsome face, run my finger down his toned body and still my kink is not to fuck him but keep him and tease him.