At first I thought he could never be serious!!! He’s either very stupid or very brave. But as the idea/fantasy was all put together by myself and the slave it all made perfect sense and I came to the conclusion it was the latter.

With everything in place and the other dommes informed about the play time I was extremely looking forward to the session!

The day has come. Myself and the other two ladies have organised to watch the rugby back in the office with the whole team. The big boss arrives and we pass him a beer.

“Oh they should be here real soon” we assure him.

What we didn’t let him know just yet was that there was no one else coming to our little get together, that the memo only went out to him.

The vile boss that letched at us, touched our hips as he walked past us pushing his hard cock in our arses. Making us stay over after hours to stare at us from his office window, touching himself under his desk. The boss we had just about had enough of.

We surrounded him while he settled with his beer, one at the front two at the back of him. He looked up at us confused.

We told him that we had discussed how he acted towards all three of us individually and that it was maybe time we made some dreams comes true.

His pathetic eyes lit up. So I said “strip off…”

Like an eager child at Christmas he jumped up and couldn’t get his clothes off fast enough: Laughable really. Sitting back down he rubbed his hands asking who was first.

This made my blood boil and by the look on the other ladies faces they were feeling the same way,  although we smiled through it knowing what was coming.

“Well,” said my fellow domme whispering in his ear, “actually you are!!! You see the dream that is about to come true you disgusting perverted fuck is ours!!!!” 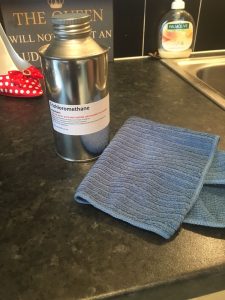 I left the room to put on my strap on cock . As I re-entered the room Mistress Saskia left to put on hers. When she came back in she passed the guest Domme a flogger. He was now looking scared.

I pour the drug chloroform onto a cloth walk up behind him, pull back his hair and hold the cloth to his face. I watch his body relax, his once tensed body turn into a floppy state.

He can do nothing now, he’s floating into a subconscious state. Now he’s ours to do anything we want with. We drop him to the floor. The drug is wearing off now but he’s still high.

I tell him to go on all fours where I start to enter my strap on into his Bitch arse and Saskia feeds hers into his mouth. While we spit roast this pervert our guest domme flogs his back.

While all this going on we film the shenanigans to make sure he won’t be acting like the disgusting letching bastard towards us again.

As he’s high from the chloroform and out of control there is no struggling and so it looks as though he’s completely consenting to this sex act. Perfect!!!!!

After we have felt that’s enough we agree he needs more drugging. Again I place the cloth over his face and watch him inhale its vapour. While doing this we watch his body go limp and his mind wander into space. It’s time to perform another act, make more blackmailing clips… Maybe even we’ve bagged ourselves a pay rise who knows!!!!!

I also use this relaxant in my kidnap scenarios and any other kind off sessions. Are you as brave as him? if so call or email me.