Washing out His Cocky Little Mouth

Hey !!! Hope everyone is doing ok.

Thought I would share a session with you that Mistress Saskia and I had today. One that we loved immensely!!!

I can’t stress enough how there is a fetish for everything!!!

There isn’t much that shocks me anymore although that is not to say they don’t excite me!! I love and live this life.

So today’s slave loves the material of a tabard, the kind a cleaner/ house maid would have worn years ago.

He booked his fate for today.

This one knows we do NOT like back chat!!  But it just seems he can’t stop himself from talking back so he comes to be taught a lesson to help him in vanilla world. And he comes to the wicked duo of Saskia and me for this lesson.

We put on our tabards knowing this is his weakness. He entered on time for his hour of treatment.

He’s told to strip and drop to his knees in such a harsh unfeeling way. We laughed as he took off his clothes, laughed at the vulnerability we knew he was feeling. Naked in front two beautiful, wicked women. We stared at him, smiling. We could feel the fear coming from him and this amuses and excites us.

Saskia walked over to him and asked him if he’s been a good boy since his last lesson.

“No.” he replied and went on to tell us how he had been dismissed from work for answering back to his boss. As I’m stood behind him pulling his head back with his hair I see Saskia pull back her arm and before the mouthy little bastard knew it she’d slapped him straight across his face!! The crack made my heart skip a beat!!! Ohhhh myyyy that noise makes me feel crazy for more!!! His head flipped to the side and the whimper fell from his pathetic mouth. 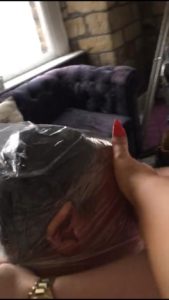 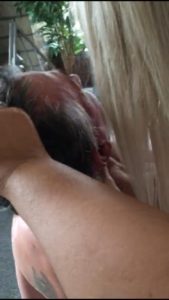 Again SLAP. Then again!!! All while I had his head held back by his hair!! I laughed and laughed then the room filled with the noise of both our laughter!!! THE best noise ever!!! I then reached for a clear plastic bag, placed it over his head and pulled it tight around his face. His breathing was in such a panic the bag didn’t take long to tighten and lose oxygen. All while he struggled, Saskia continued to slap his face!!!

I ripped off the bag!! I asked him if he’s learning his lesson yet. He replied yet again with that uncontrollable mouth of his, “What do you mean by that?” With attitude in his tone.

I know I should have felt angry with his response but all I could feel was pleasure that his punishment was to be turned up a notch.

Saskia went behind him, put her arm around his neck and pulled tight to hold him in place while I went to the kitchen Cupboard. Inside I looked for something vile and there it was; a bottle of brown vinegar!  I reached for it, showed Saskia what I’d chosen and her face lit up and her laugh started mine off as always.

She held him tight. He knew what was coming so he was starting to struggle. She pulled back his head by his hair I grabbed his mouth to open it and started to shake in the vile strong bitter vinegar!!!!!!

I held his mouth shut so he had no choice but to swallow the vile liquid I was using to wash out his mouth.

He swallowed, his face said it all. I repeated this 3 more times. 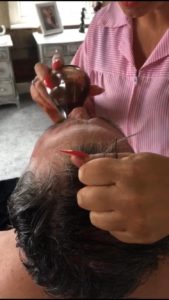 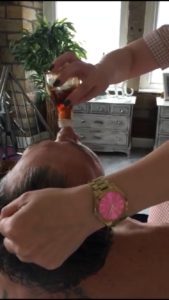 I then asked him, “Have you learned your lesson yet?

The request fell on deaf ears. I pulled him close to hug him and tell him it’s ok, that we will look after him and when he thought it was over I pulled back his head and spit in his face!! Mine and Saskia’s laughter once again filled the room. We then continued to slap him not just to teach him his lesson but for our own pleasure and amusement.

He was our toy for the next 20 minutes or so.

After we grew bored we threw his clothes at him and told him to get the fuck out. We spent the next few hours on a high laughing at what we did. This is what we get off on this what we thrive to do.

You can watch a clip of what we did to this fool on our only fans site:

I play 10am until 10pm and do overnight stays in a beautiful apartment in the Huddersfield area.

See you all soon.